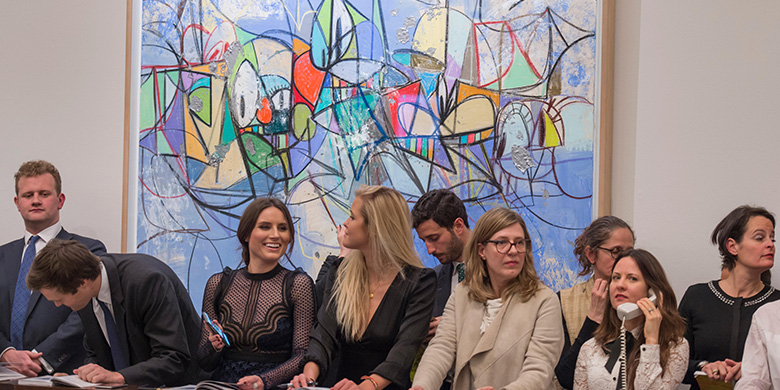 Just as George Condo’s art has been influenced by Pablo Picasso, it seems that Condo’s market performance has been similarly influenced too. The American artist’s work is currently in high demand.

In 1957, Pablo Picasso (1881-1973) kept himself busy working on a series of artworks directly inspired by Diego Velázquez’s 1656 masterpiece, Las Meninas. Picasso was in his mid-seventies at the time, but clearly not showing signs of slowing down. The expansive series is now among the highlights of Barcelona’s Museu Picasso, with the artist having donated all 58 works to the museum.

1957 also happens to be the year that another notable artist, George Condo, was born in Concord, New Hampshire. Condo’s early years in New England coincided with the final acts of Picasso’s career, a period in which the iconic Spanish artist was active in the United States. Artworks unveiled by Picasso during Condo’s childhood included the fifteen metre high Chicago Picasso, installed in the Windy City in 1967.

Less than a decade after Picasso died, Condo emerged on the American art scene in the early 1980s. Working alongside other notable trailblazers, such as Jean-Michel Basquiat and Keith Haring, Condo was part of a young generation of artists that re-energised the art world. At a time when the appeal of purely abstract work had begun to wane, Condo and his contemporaries were notable for the way they reintegrated figurative elements into their work. They also proved that painting was still a relevant way of addressing contemporary concerns and, crucially, that it could do so in a way that felt fresh.

Drawing on multiple influences, from both art history and literature, Condo’s distinctive work is known for the way he reinterprets the approach of earlier artists, channelling their spirit in unique ways. His reference points have often included paintings by European Old Masters, such as Velázquez and Francisco Goya, as well as modern artists. Condo populates his artworks with imagined characters, combining both humour and menace in his portrayal of fragmented figures.

Among Condo’s 20th century influences, Picasso looms large as an artist with whom he has a special affinity. Condo studied the Spanish artist’s work while he was still a young painter, with Picasso’s approach to portraiture particularly influential on the development of Condo’s compositional style.

Like Picasso, Condo often allows the face and upper torso to dominate the canvas, while the two artists similarly employ both figurative and abstract elements to break-up their portraits. Distorting the way we normally expect to perceive a face, the effect allows different aspects of a personality, or even multiple personalities, to emerge in a single portrait. Picking up on the link between himself and Picasso, Condo has been quoted as saying:

“I describe what I do as psychological cubism. Picasso painted a violin from four different perspectives at one moment. I do the same with psychological states. Four of them can occur simultaneously.”

The parallels between Condo and Picasso have become an important point of interest when discussing the latter’s artistic legacy. In 2015/2016, for instance, the major Picasso.mania exhibition at the Grand Palais in Paris included seventeen pieces by Condo. This was followed in 2018 by the Sotheby’s Hong Kong auction, Face-Off: Picasso / Condo, which sought to establish a direct dialogue between selected works by the two artists.

Picasso, of course, stands tall among the most famous names in all of art history, his work recognisable to experts and public alike and his dominant role in the story of 20th century art still strongly felt today. Condo has some way to go to reach that level of fame, but already he is one of the most successful and acclaimed living artists, the value of his work having increased exponentially since he first emerged on New York’s East Village art scene.

Christie’s listed Condo among “2021’s hot artists”, with the auction house name checking him alongside household names such as Andy Warhol and David Hockney. In fact, since 2000, the value of Condo’s work has outperformed Warhol and Picasso, as well as the overall market. That trend has been replicated over both the last ten years, and the last five, with sales of Condo’s work at auction notable for successfully performing well above original estimates.

As an indication of his global reach and appeal, Condo’s work has fared particularly well in Hong Kong-based sales: in July 2020, for example, Condo’s 2010 artwork, Force Field, sold at Christie’s Hong Kong for a record HKD 53,150,000 ($6,891,135) more than doubling its estimate. More recently, a smaller 2008 piece, The Dreamer, sold in November 2021 at Phillips Hong Kong for HK$11,140,000. With that piece also doubling its estimate, the same series of auctions at Phillips saw a number of other works by Condo sell for seven figure sums, further cementing his position in the market.

Condo’s strong performance in the secondary market has been matched by the attention shown to him by leading galleries and museums. Notable recent exhibitions have included Ideals of the Unfound Truth at Hauser & Wirth, London, and The Picture Gallery at Shanghai’s Long Museum.

Critically established as one of the leading artists to emerge in late 20th Century and regarded as one of the most important alive today, Condo represents an exciting and dynamic asset for any art-based portfolio. In his own distinctive way, he has shown that he is more than comfortable walking in the footsteps of earlier masters, including the great Picasso.

Past performance is no guarantee of future results. Any historical returns, expected returns, or probability projections are not guaranteed and may not reflect actual future performance.

Investments offered by Mintus are illiquid and there is never any guarantee that you will be able to exit your investments on the Secondary Market or at what price an exit (if any) will be achieved. In addition, the timeframes to liquidate the underlying asset and return capital may be extended beyond those anticipated by the manager due to many factors. You should not rely on any specific timeframes for a return of capital and should not enter into any investment if you think you may need to liquidate the investment in the mediumto-long term.